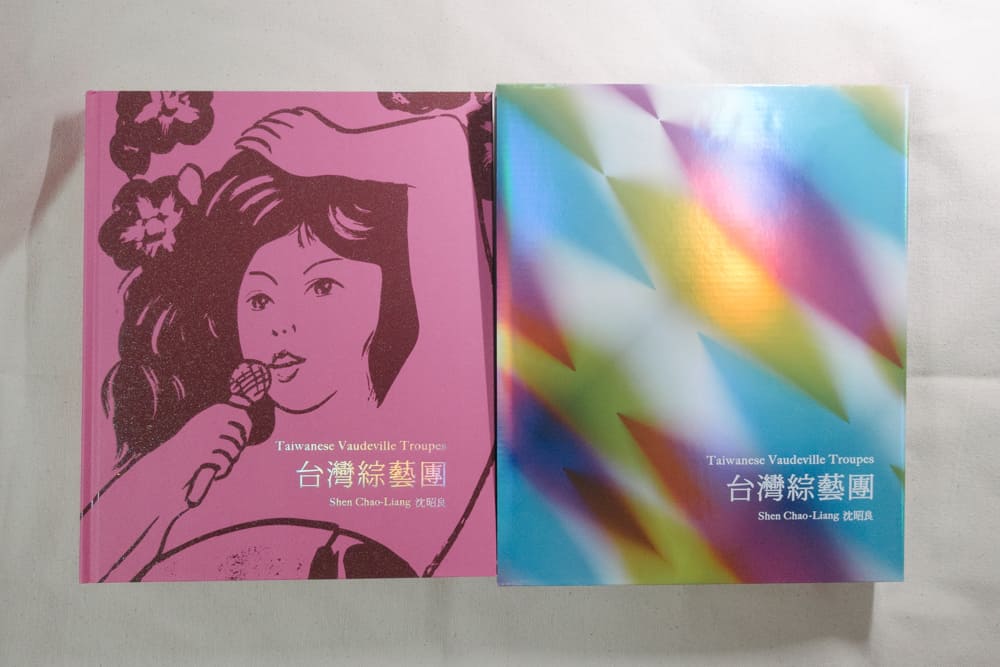 It was the birthday of Chinese Goddess Matsu and I was standing on the highway in the Jianan plain area. The night breeze was gentle and cool. Suddenly, I felt like a tornado chaser. Looking at the fireworks all around me, I contemplated about which show to hit next! ~ Shen Chao-Liang

Taiwan’s Shen Chao-Liang 沈昭良 has self-published Taiwanese Vaudeville Troupes, a new book of photographs he first made about the same time as his iconic STAGE work in 2005. The new photographs (2005–2016) are black and white  snapshots of the people who grace the “stages” so to speak, including professional pole dancers and mourners, and offer a behind-the-scenes documentation and loose compendium to Shen’s more formal and slow gaze at the neon-lit stage structures and how they temporarily disrupt landscapes during festivities. One would be tempted to imagine Shen making these fly-on-the-wall candid images with a 35mm camera in between moments setting up and dismantling his large format camera.

Comparisons of Taiwanese Vaudeville Troupes can be made to the much milder Getai entertainment groups in Singapore (and Malaysia) that Bob Lee has previously documented, particularly during the Hungry Ghost Festivals.

Performing groups in the form of cabarets, song and dance ensembles, recreational bands, or even in the name of entertainment companies, are mobile performing troupes endemic to Taiwan, where their customer base and show content are inextricably interlinked. They have been around since the 1970s, with song and dance performances as their principal act, and have made regular appearances in all sorts of occasions—from weddings, funerals to festivities.

In the early days, in addition to the conventional makeshift staging still in use today, there were also modified trucks furnished with stereo and simple keyboard equipments. But with the advancements in technology, coupled with the thirst for quality audio visual effects, both from the business owners and audience, the stage has progressively developed into the likes of electronic floats or foldable mobile hydraulic trucks we see today.

As for the contents of the cabaret shows, song and dance performances have remained the main acts since the beginning. Back in the days, singers were usually dressed in elaborate costumes comparable to indoor cabarets. Recent years have seen more skimpy-clad singers wearing two-piece with bikini underneath. The shows must sport a good run-down tailored to clients’ needs and constantly revamped to stay attractive. In addition to celebrities and singers putting on exhilarating shows, a wide array of other performances, such as pole dancing, acrobatics, magic, folk arts, large-scale music shows, or even man strip shows or drag shows, can also be arranged depending on budget and scale. In more recent times, dancers performing on makeshift poles installed on open-top jeep trucks have been increasingly popular as part of the pilgrimage processions.

The performers, either full-time or part-time, have their reasons for being a part of the shows. Some do it to support family livelihood, some want to be trained in this special expertise, some are just passionate about performing, while a portion are in the business since their family have long been in related industries. Performers usually run from show to show, performing on a number of stage trucks nearby during a time period, hence their jobs are mobile and temporary in nature.

The majority of performers are singers from all over Taiwan. Based on my fieldwork investigations, besides full-time singers, a sizeable share are students, English teachers or bank clerks who double as part-time show performers on holidays. Young female singers are generally favored in the business, whereas singers who have reached their peak usually switch tracks to become a hostess or simply become a business owner, while some drop out of the industry after tying the knot.

Of the different performance genres by these local groups, the role of the filial daughter, professional mourners hired by the grieving family to attend the funeral, has become a common component of Taiwanese funerals. The archetype of this character is Bai Chong from the popular 1970s television puppet show Hûn-tsiu Tāi-jû-kiap by Toshio Huang. Bai Chong’s image is so ingrained in the collective psyche that all hired mourners are now referred to as Bai Chong.

Made between 2005 and 2016, this collection of images has been taken at the various religious ceremonies, weddings, and funerals in different parts of Taiwan, and is meant to be a comprehensive visual compilation of macro and microscopic views of the intertwining links between the vaudeville performance industry and the Taiwanese society.

Taiwanese Vaudeville Troupes, by Shen Chao-Liang is available at the VOP Magazine Bookshop.