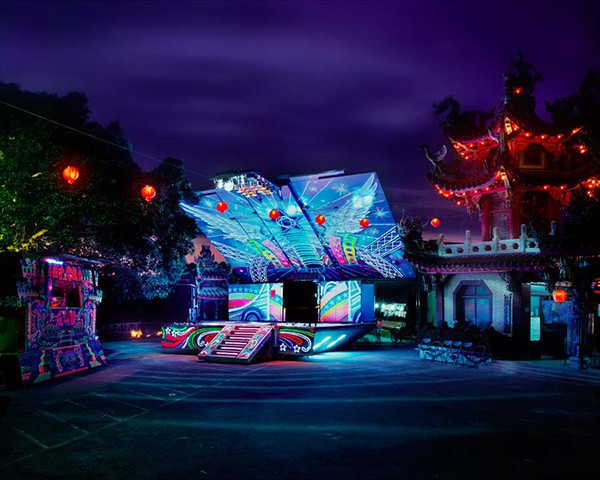 Stage trucks are mobile venues used by traveling performance groups for entertainment, and by politicians for their electoral campaigns.

In the early 1970’s, the trucks were furnished with simple stereo and keyboard equipment, and required extensive manual set-ups. With the advent of new technologies, the stages have morphed into electronic multimedia floats; marvels of precision involving special materials, electronics, hydraulics, and industrial design –all powered by wireless remote control, with set ups accomplished in just a few minutes. According to some surveys, there are about 600 working stages in Taiwan today, most of which are in the Yunlin, Chiayi, and Tainan areas; where there is a large density of temples, frequent religious celebrations, and customary outdoor banquets for festive events.

I have been working on the Stage series for five years, using a 4 x 5 view camera and color reversal film. This allows me to better capture the extensive range of tonalities of these marvelous machines, set in stark relief to the common realities of their mundane surroundings.

Shen, Chao-Liang was born in Tainan, Taiwan, in 1968. He has a master’s degree in Applied Media Arts, from the National Taiwan University of Arts. He has worked as a photojournalist since 1993, and as the Deputy Chief of the Photography Department at the Liberty Times, and as Artist in Residence at the National Central University. He is currently a freelance photographer, and teaches photography at several universities in Taiwan.

He won the Golden Tripod Award for Best Photography (magazine category) of Taiwan in 2000 and 2002; the 2004 Asia Award in Sagamihara, Japan; the Best Foreign Photographer Award at the 2006 Dong-gang Photography Festival, Korea; and the Honorable Mention of the 2010 Taipei Art Award. He has exhibited in Taiwan, China, Korea, Spain, Japan, US, Canada, France and Peru. Published works include: STAGE, Tsukiji Fish Market, YULAN Magnolia Flower, Reflections of Nan-Fang-Ao, and Brand 9.