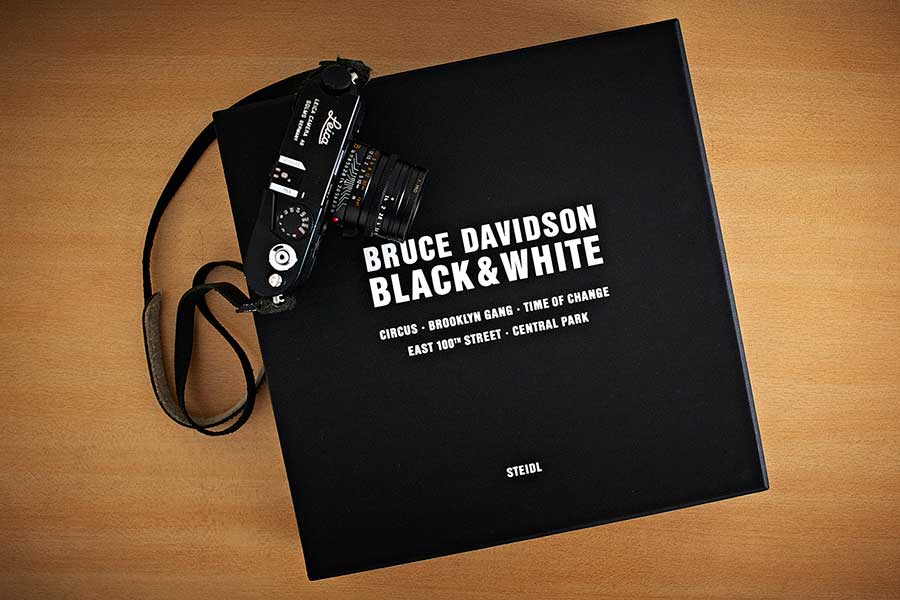 A few days ago when I completed the last of the series of reviews for Bruce Davidson‘s Outside Inside, I coincidentally received the latest Bruce Davidson offering from Steidl publishing in the mail. This latest offering is called Black & White. Black & White has been released as a limited edition of 2,000 sets and comes with a certificate hand-signed and numbered by Davidson himself (included in Volume 1 of the set). The blurb from the publisher states:

“Black & White is the definitive collection of Bruce Davidson’s black and white photography, spanning a period of 40 years. This collectable five-volume set comprises re-prints of classic books of Davidson’s poignant and purposeful imagery, some of them newly edited and expanded. The seminal bodies of work are Circus (1958), an intimate portrait of a dwarf clown; Brooklyn Gang (1959), depicting a group of troubled youths; Time of Change (1961–1965), a civil rights documentation in America; East 100th Street (1966–1968), showing life on one block in Spanish Harlem; and Central Park (1992– 1995), exploring layers of life in New York’s famous urban oasis. Black & White is a tribute to Davidson’s unique photographic achievement, and a powerful document of social change.”

Out of the 5 volumes released in this box set, I only own a copy of East 100th Street that was reissued by St. Ann’s Press in 2003. Time of Change I have seen in our local library in Singapore. I have not seen the original Central Park book but was somehow not too impressed with the series when I went through Outside Inside. Circus and Brooklyn Gang I have really wanted to see more of, ever since I saw them featured in Outside Inside. It was quite unlikely or impossible that I would ever get to see or even own copies of the books included in Black & White due to the high prices that these books command. Second hand prices of Brooklyn Gang average around US$500 and new copies are from US$750 to US$1,000. Second hand copies of Circus sell anywhere from US$150 to US$600. Second hand copies of  East 100th Street sell anywhere from US$375 to US$1,000. You get the idea. So Bruce Davidson’s Black & White really is a dream come true for me. :P

This review will include all 5 Volumes at one go; so please accept my apologies if it is on the long side. There are many reviews of the original books online. Thus, this post just serves to give readers an overall idea of what this new box set is like.

Like Outside Inside, Black & White is on the large and heavy side. It ships at around 18.8 pounds or 8.5 kg. The 5 cloth bound volumes come in a nice handmade slipcase. The following are some photos of the box set. The camera is there to give you a rough idea of the box set size. I also photographed it beside Outside Inside as another size comparison. 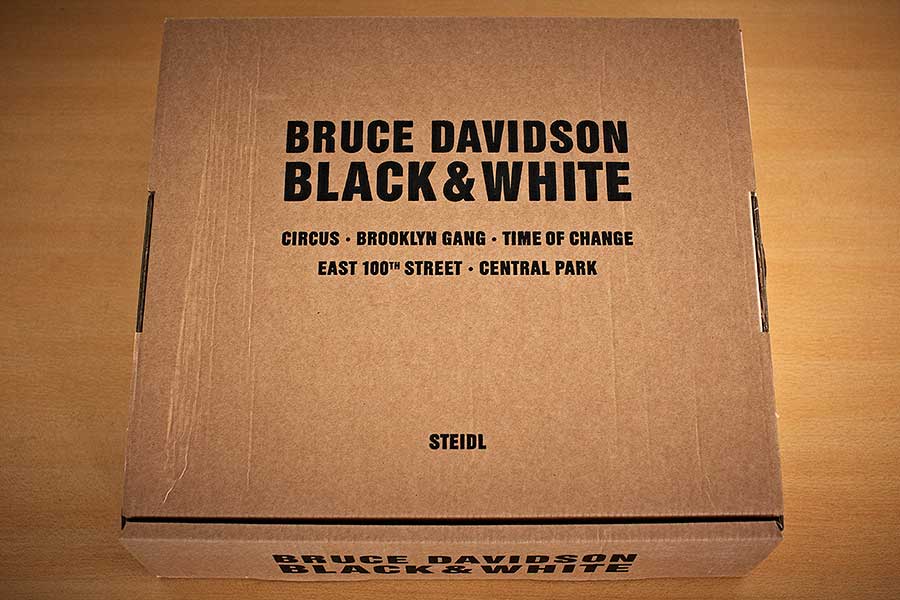 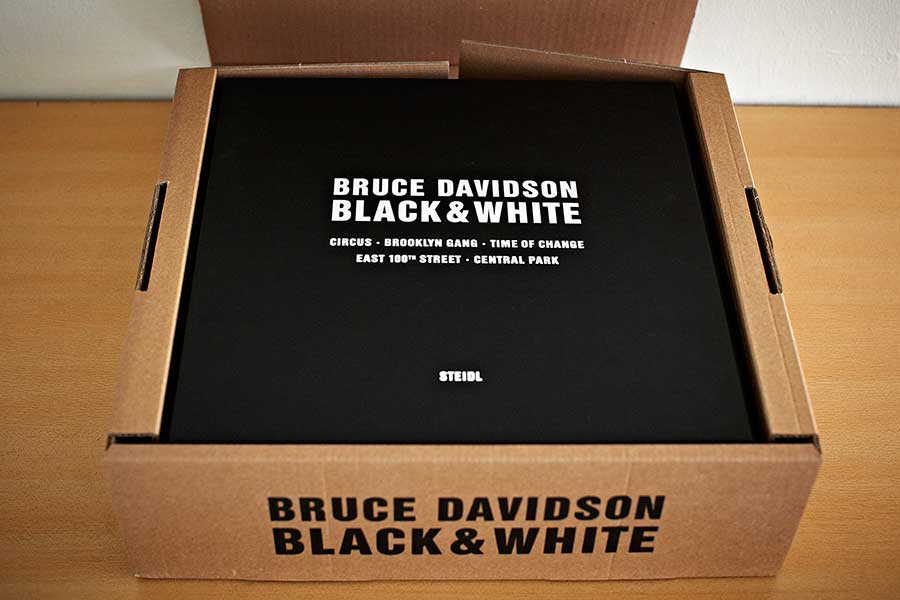 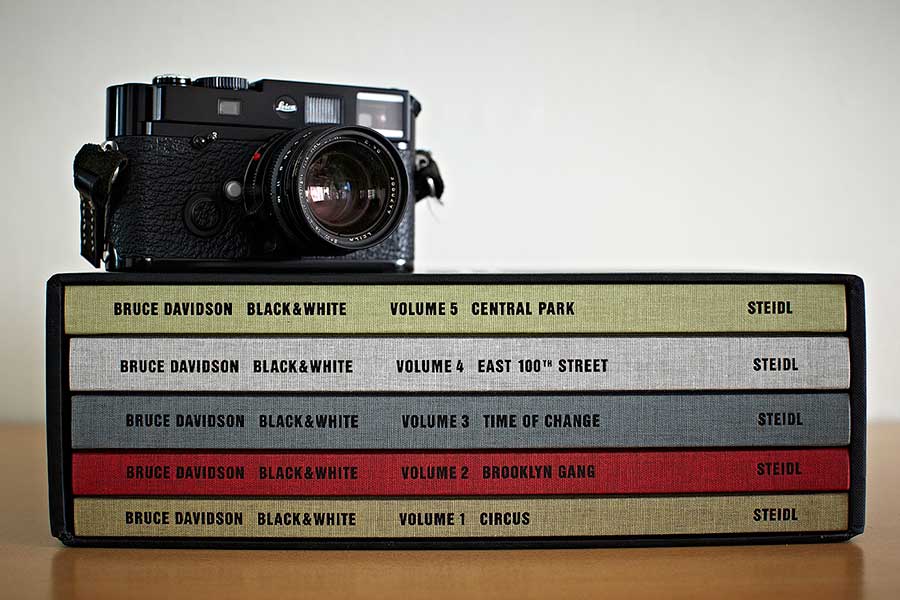 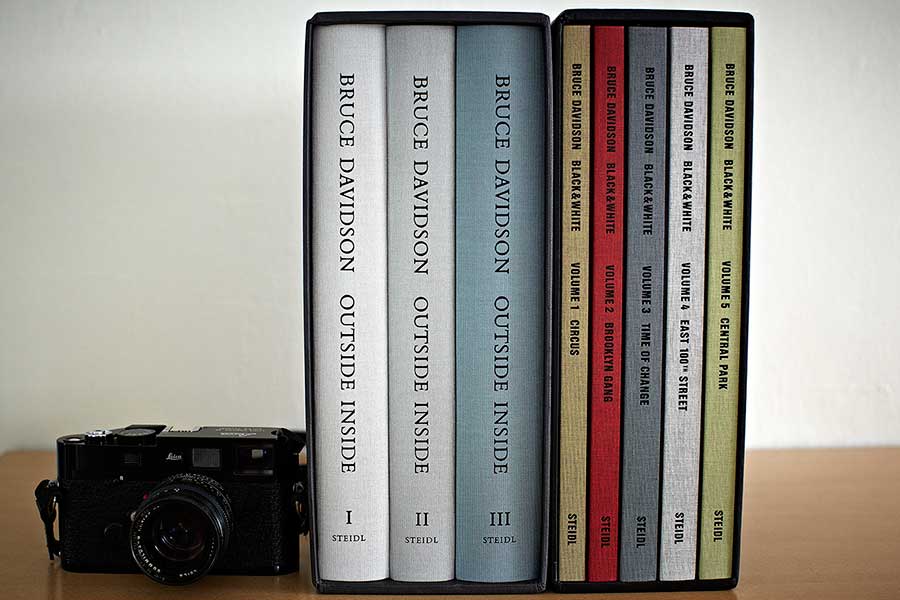 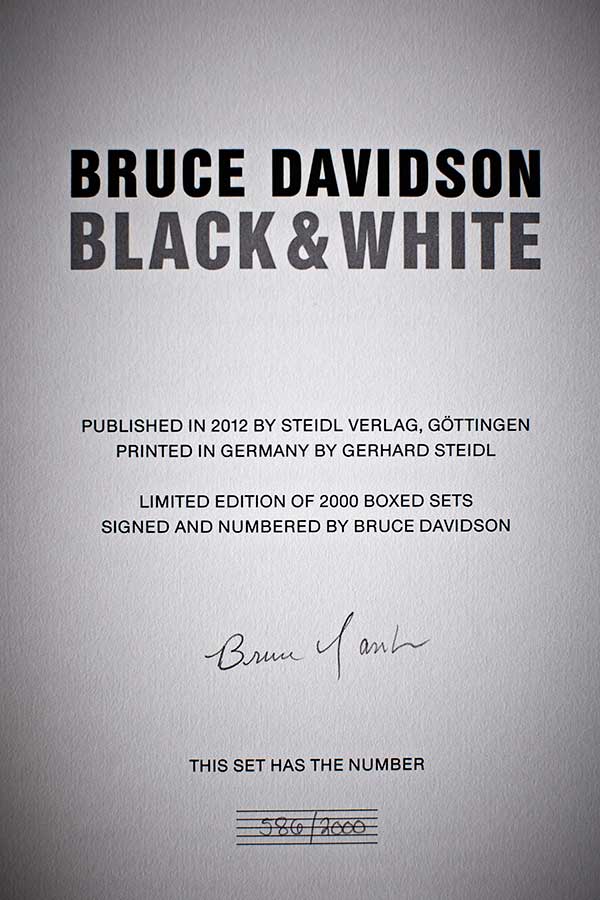 Circus (104 pages with 82 tritone plates) is split up into 3 sections: “Beatty-Cole-Hamid Circus. Palisades Amusement Park, New Jersey, 1958”, “Ringling Brothers & Barnum and Bailey Circus. J.S. Dorton Coliseums, Raleigh, North Carolina, 1965”, and “James Duffy and Sons Circus. Ireland, 1967”. Davidson’s portrait of Jimmy Armstrong, a dwarf clown, in the first section is a real masterpiece and highlight of Circus. The sadness and alienation Jimmy faced due to his ‘stature’ comes out so vividly in Davidson’s photos.

“For Jimmy Armstrong, known as the ‘Little Man.’ He was a giant in my eyes”. ~ Davidson’s dedication of this book to Jimmy 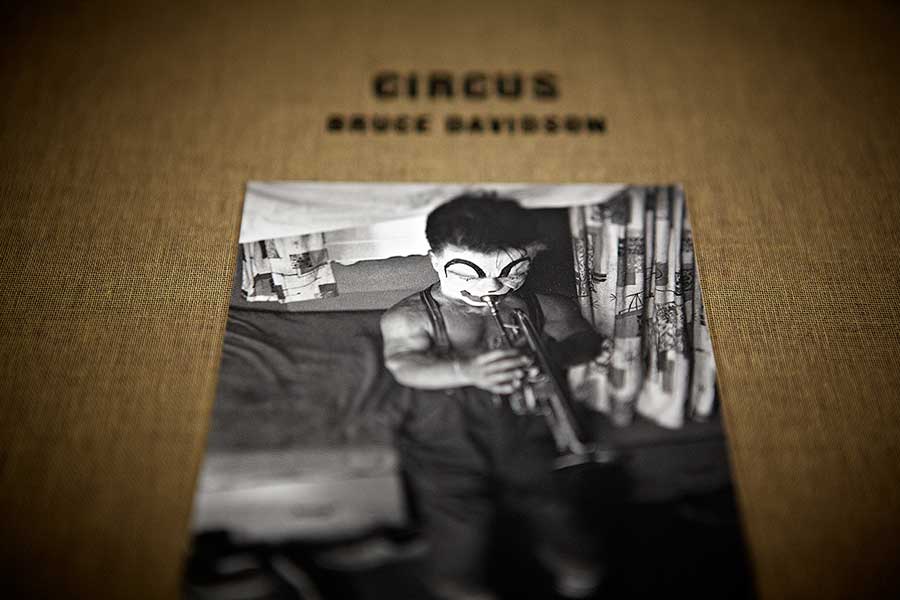 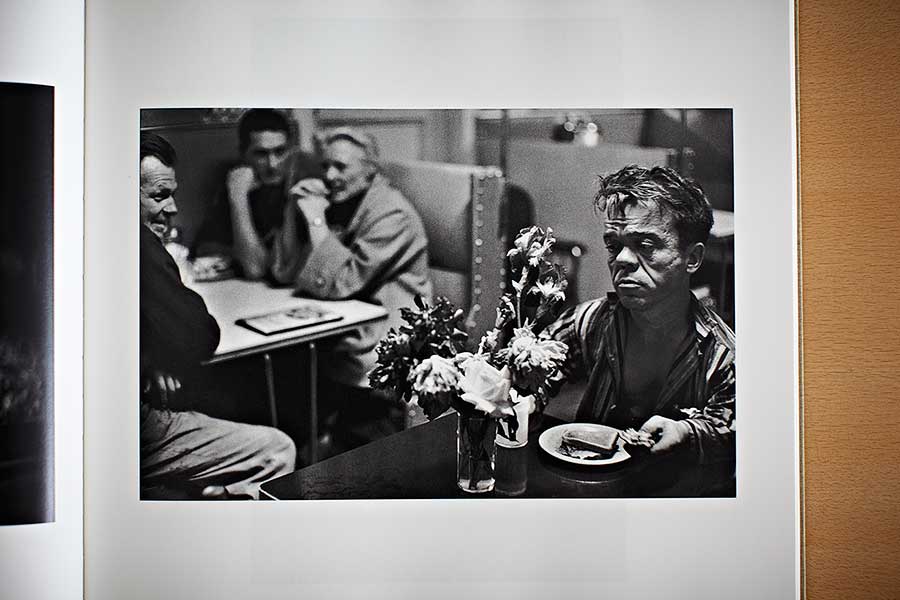 “As my friend, Pauley said to me, ‘We didn’t come from dysfunctional families; the whole neighborhood was dysfunctional’“ ~ Bengie (Brooklyn gang member)

Brooklyn Gang (120 pages with 95 tritone plates) is split up into 9 sections: “The Street”, “The Candy Store”, “The Park”, “The Hole”, “The Train”, “The Luncheonette”, “The Party”, “The Trip”, and “Coney Island”. I suspect that this edition by Steidl has been expanded as the original release by Twin Palms Publishing in 1998 was only 96 pages long and featured around 70 photographs. As I mentioned in my review of Outside Inside, Brooklyn Gang is a stunning piece of immersive documentary photography. Finally getting to see the full series is a real treat. Davidson wrote the following in the Afterword to the book.

“I was twenty-five and they were about sixteen. I could easily have been taken for one of them. My way of working is to enter an unknown world, explore it over a period of time, and learn from it. The previous year, I had traveled for a few months with a circus, making intimate photographs of a dwarf clown. Now I found myself involved with a group of unpredictable youth who were mostly indifferent to me. In time they allowed me to witness their fear, depression, and anger. I soon realized that I too, was feeling some of their pain. In staying close to them, I uncovered my own feelings of failure, frustration, and rage.” 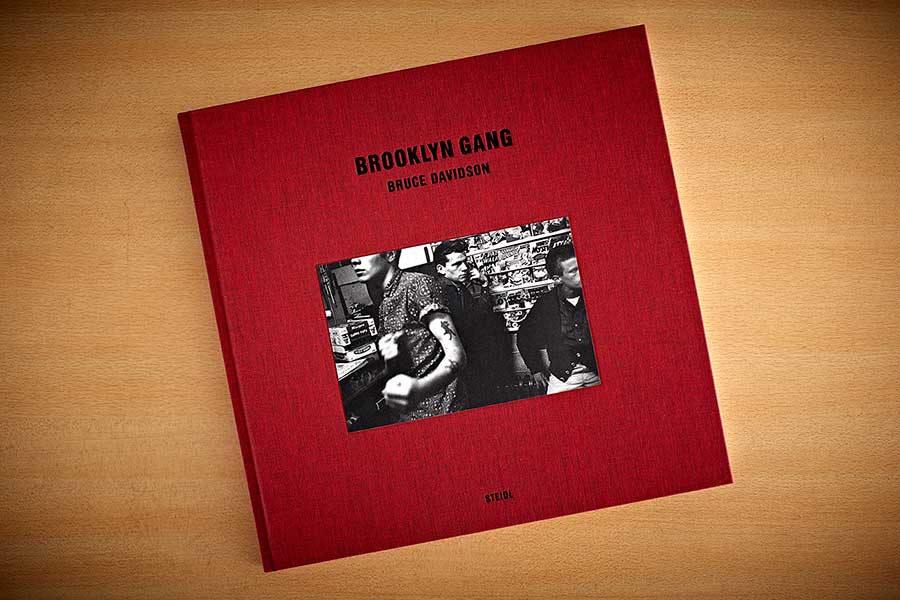 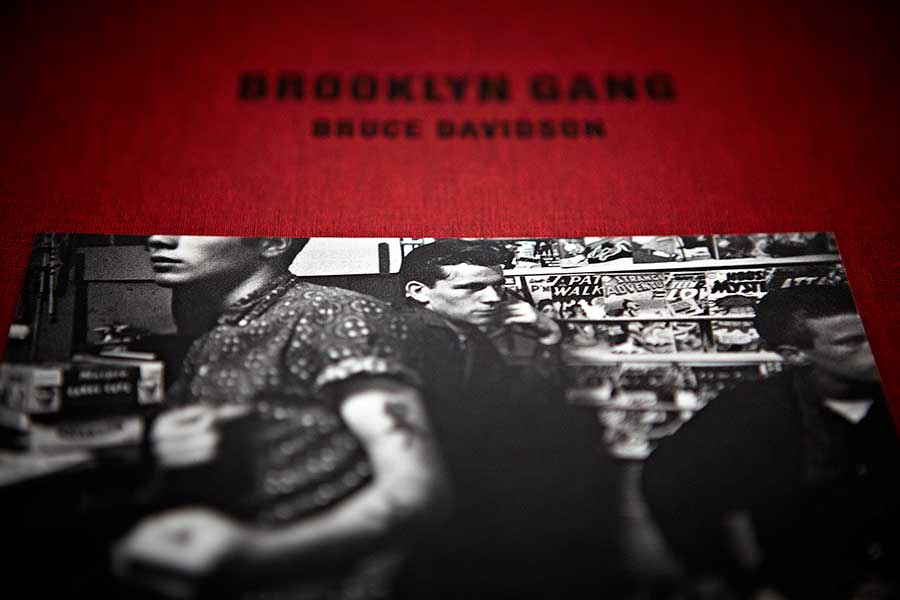 “These images serve to bear witness for those who walked, marched, rode, were beaten, jailed, denied their dignity, or died for freedom and equality” ~ Bruce Davidson 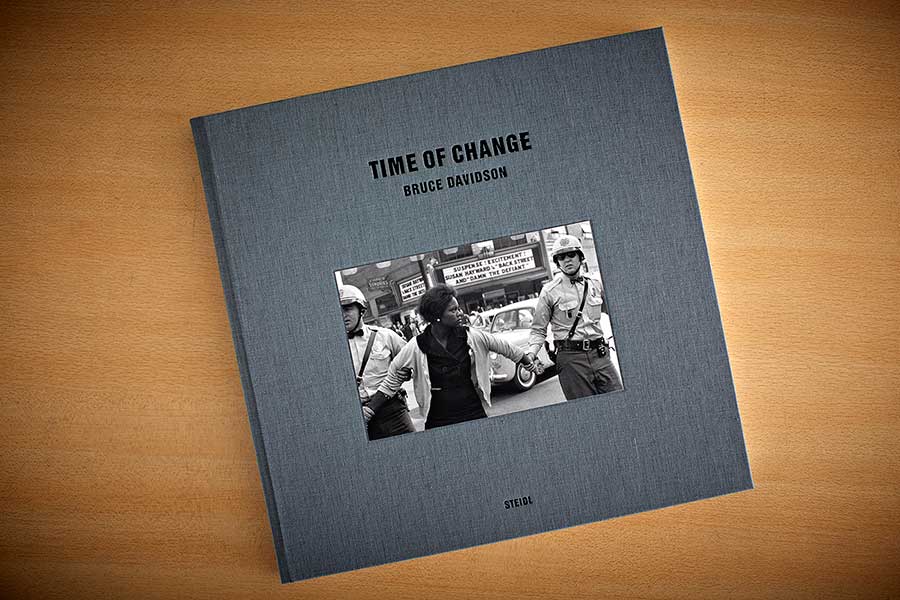 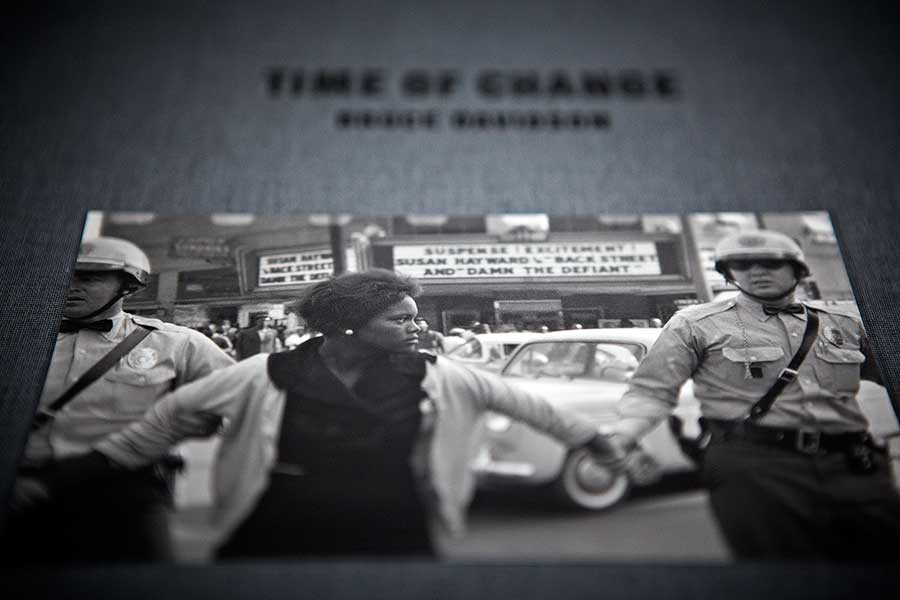 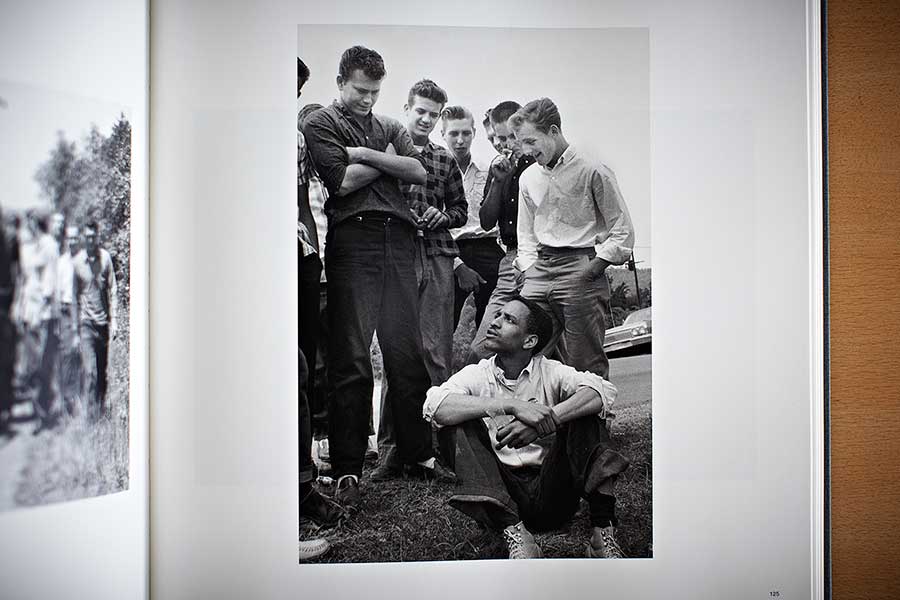 East 100th Street (168 pages with 149 tritone plates). I focused quite a bit on the East 100th Street series in my review of Outside Inside : Volume 3 so I am not going to repeat the whole thing here. What I do want to say is that I was too hasty in concluding that the printing quality of the St. Ann’s Press (SAP) 2003 edition was much better. I did a side by side comparison of the SAP and new Steidl edition and now realise that it was really a matter of personal preference that lead me to conclude that the SAP edition was better. The SAP edition was printed on a warmer paper which resulted in deeper blacks and more contrast which gave the images a more 3-dimensional look. That is exactly the way I like to print my photos — warm paper and deeper blacks. The downside is the loss of some shadow detail. Steidl’s edition is printed in a more neutral way which preserves the shadow detail. I shot some side by side photos of both books and it is easy to see what I mean (the darker and smaller photos are from the SAP edition). At the end of the day, it really boils down to personal preferences. 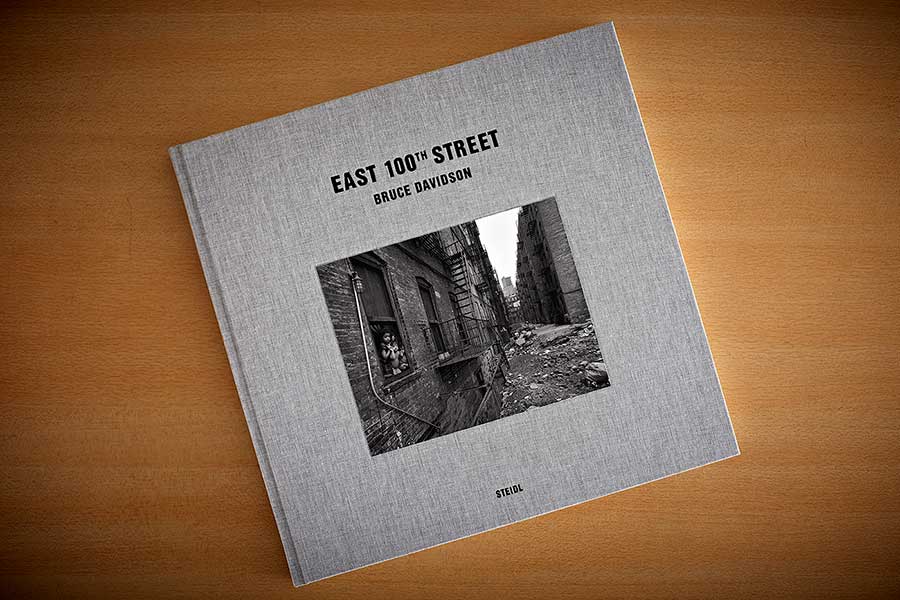 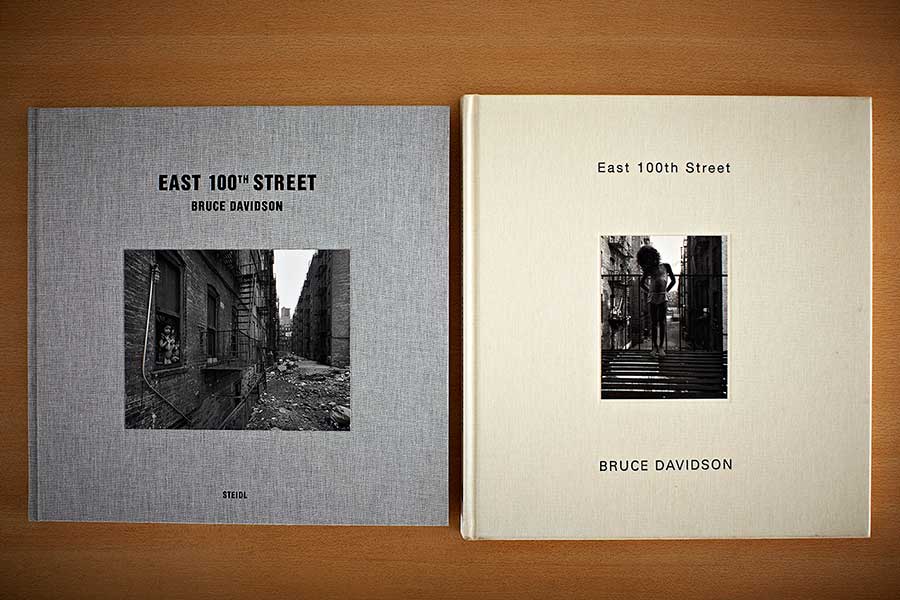 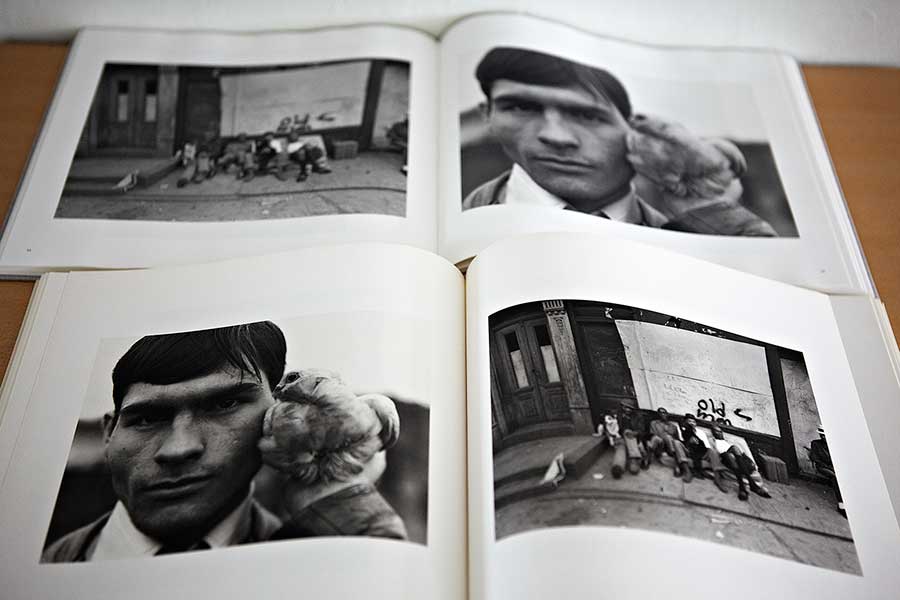 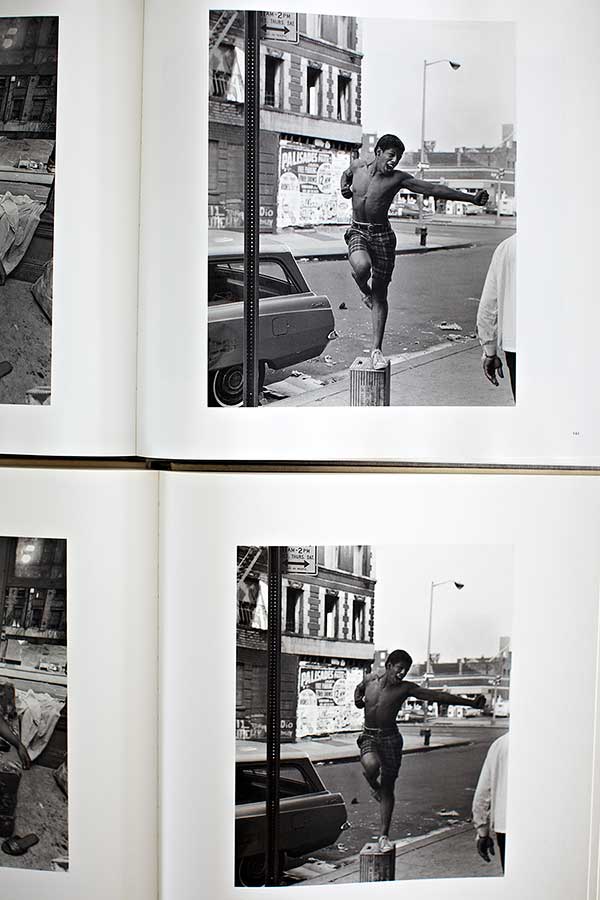 Central Park (144 pages with 91 tritone plates). This final volume was a bit of a shocker (in a good way) to me. As I mentioned above, I was quite unimpressed by this series when I saw them in Outside Inside. Something just did not feel right with the series then, which was why I did not feature it in my last Outside Inside review, despite it taking up one of the larger sections of Volume III.

Davidson used a 35mm camera, a medium format Hasselblad with a super wide lens and a Noblex swing lens camera for the Central Park series. Out of the 91 images in the book, 35 were taken by the Noblex, 32 by the 35mm and 24 by the Hasselblad. When I went through this re-issue of Central Park, I realised that the problem I had with this same series in Outside Inside was one of presentation. The Noblex camera takes panoramic photographs and they were presented in Outside Inside as one image per page which somehow diminished the impact of the photographs (see the last image). Central Park presents each of these same panoramic photographs spread over 2 pages. They are printed big and are absolutely gorgeous to look at! The printing and the binding of the book is excellent and the panoramic photographs flow seamlessly from one page to the other without anything being lost in the gutter. I guess if they had been printed in the same way in Outside Inside, some of the image would have been lost in the gutter due to the thickness of the book (372 pages). Davidson’s use of his Noblex is masterful and the highlight of Central Park. It is probably the best series of images I have ever seen taken with a swing lens camera! 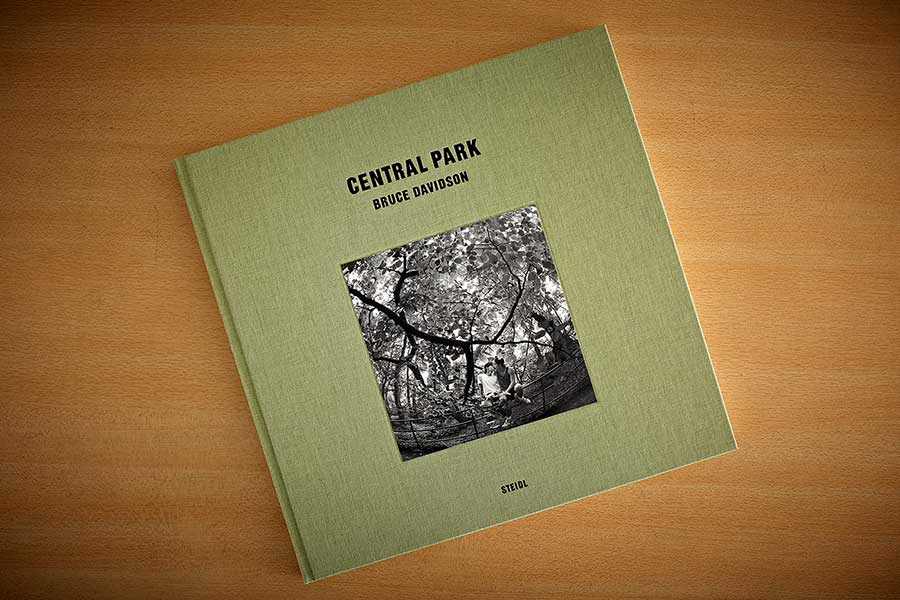 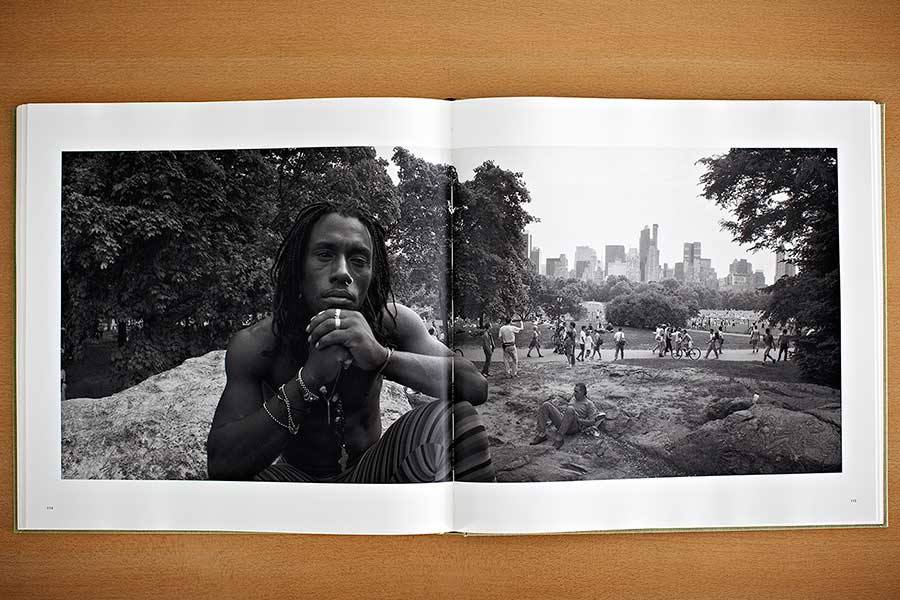 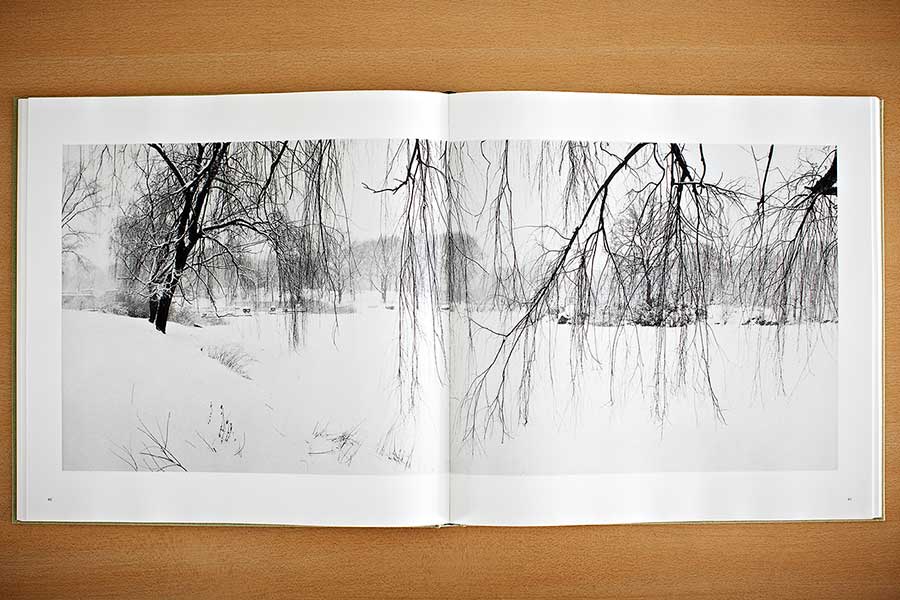 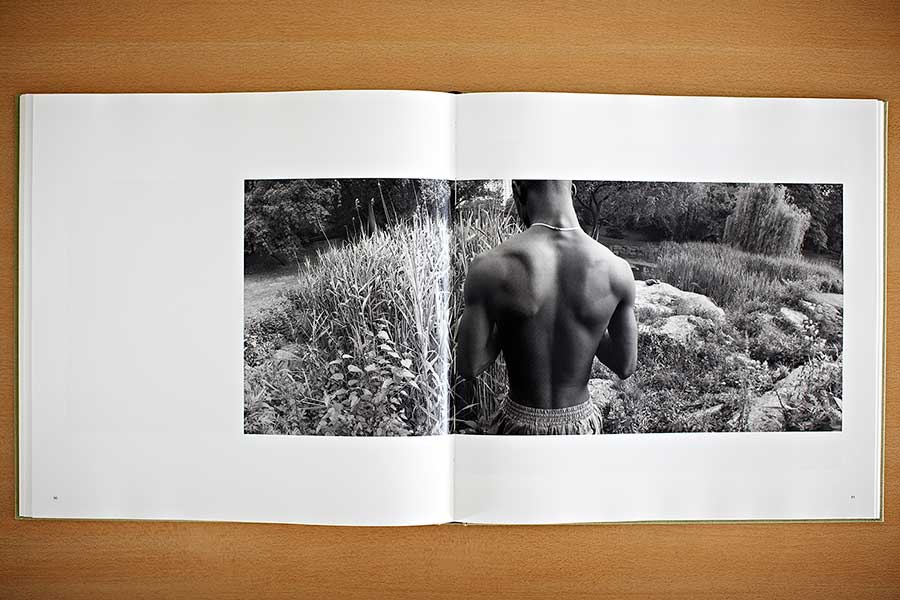 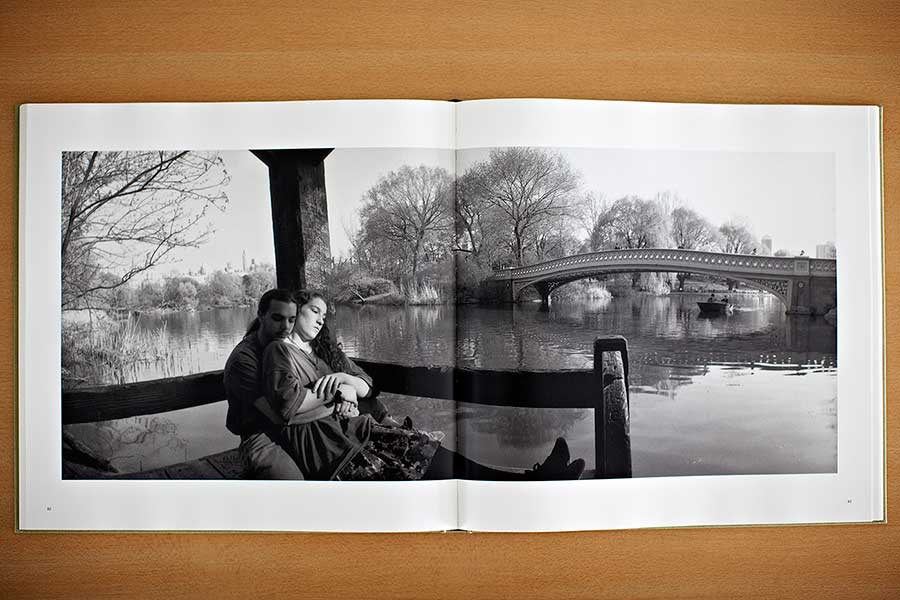 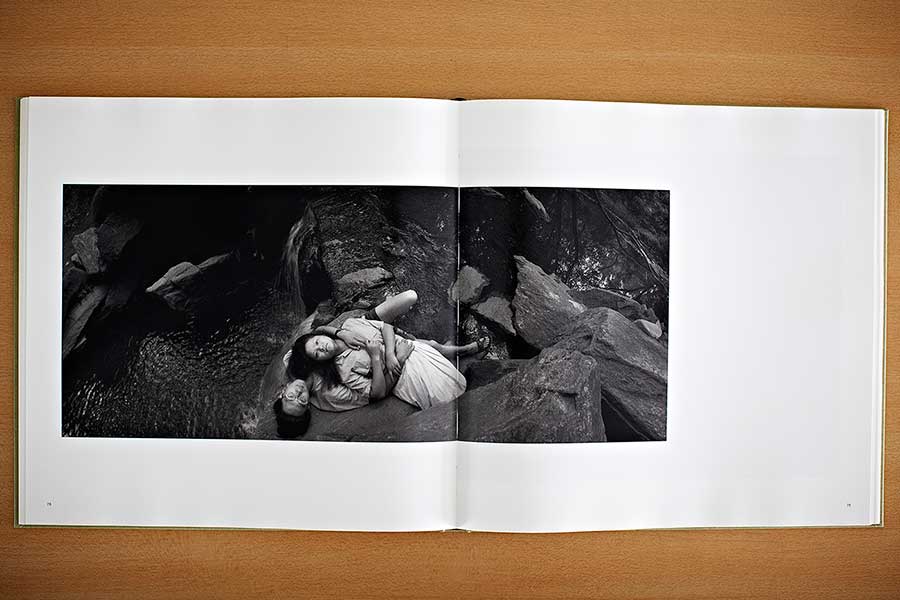 In my opinion, Outside Inside was “Highly Recommended” while Bruce Davidson’s Black & White is “Grab it while you can!”. It is certainly expensive for a set of books (US$345) but considering that prices (second hand) of the individual books are ridiculously expensive, this is a bargain. I have no idea if Steidl intends to release these re-issues individually or as a non-limited edition box set but I would not count on it. Black & White is available on Amazon (US) and Amazon (UK).

Street Photography in Japan with the Fuji X10 – Part 2
Photo books: Women Photographers
Do you print your photographs?