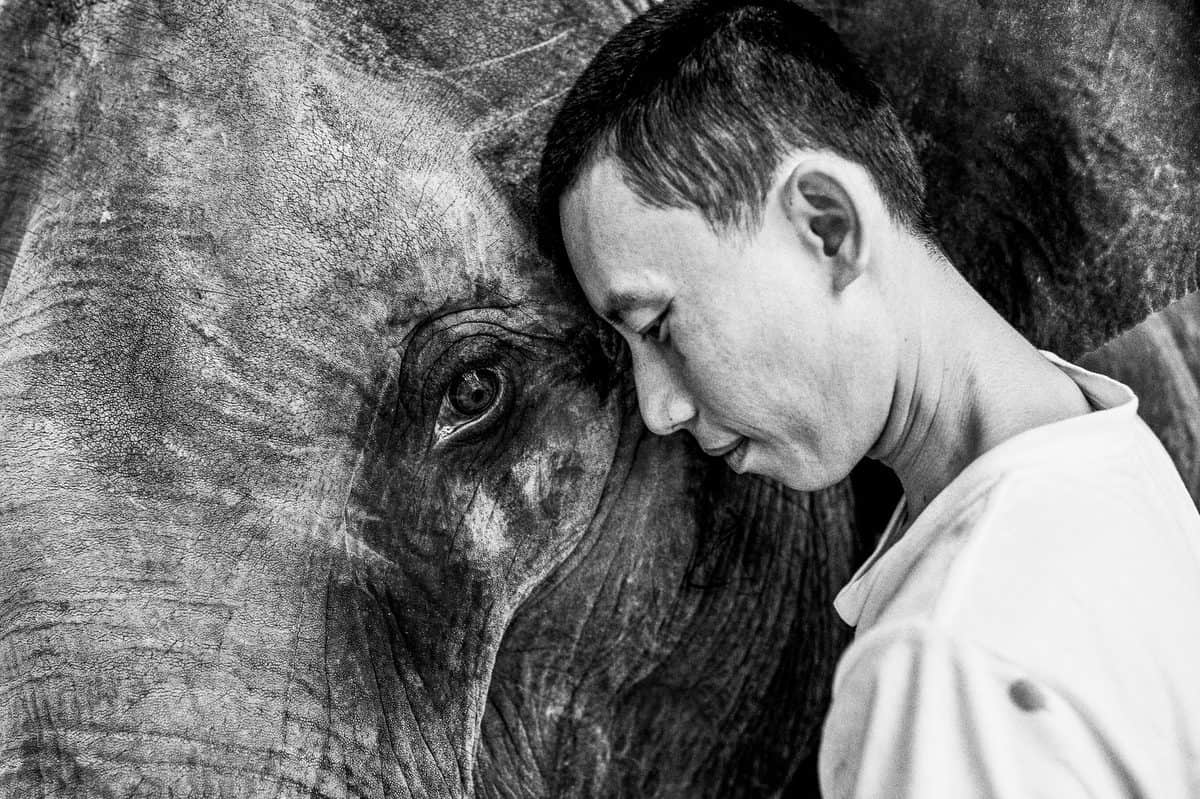 A Trunk and other Tails, a new photobook by Dilla Djalil-Daniel, is about the loving and dependent relationships and bonds that can exist between animals, which have suffered as a result of human activity, and their carers and custodians.

As Dilla prepares for an accompanying exhibition in Jakarta to launch the publication, Andri Tambunan catches up with her to find out more.

Andri Tambunan: Please describe briefly your photographic background. How did your love affair with photography start? Who and what inspired you to pick up a camera?

Dilla Djalil-Daniel: I actually started at a very early age. I was 9 years old when I had my first own camera. It was a boxy Kodak Instamatic and I still keep that camera up until now. At that point, I became the photographer in the family and my favorite models were my dogs and my Snoopy toys. Eventually, as I got older my camera gear gradually became more sophisticated and I then started using a rangefinder as well as SLR cameras.

It was my late father who inspired me the most. He was the one who bought me that little Kodak camera and he encouraged me to keep shooting. Since I am not good at all with drawing, I am very grateful that my dad introduced me to the world of photography, so I can still create something using my hands, my eye and my sensitivity and thank God it doesn’t involve using pencil nor brush!

Can you tell me what your project is about?

This project is about the loving and dependent relationships and bonds that can exist between animals, which have suffered as a result of human activity, and their carers and custodians. This is a series of photographs featuring a variety of animals, which I shot in Indonesia, South Africa, Thailand, and Nepal.

You’ve been working on this series for many years.  What are some challenges that you encountered and how did you overcome them?

I started the elephant project in 2012 as part of my participation at the Foundry Photojournalism workshop in Chiang Mai. I was very much “green” at that time. Little did I know that eventually, it would become a long-term project for me. The main challenge actually came from within my own self. I needed to convince myself that these images and the series of animal stories I did were really worth telling and worth showing to the public, rather than just sitting pretty on my hard drive. It took few years for me to finally decide to come out of my shell.

Ever since I’ve known you, you’ve been taking photos of animals. I think the subject matter that the photographer chooses to photograph reveal so much about him/herself.  Can you please share your relationship with animals/pets and how they play a role in your life in the past and present?

I grew up with dogs. My extended family has always been dog people. Even my religious grandparents always had dogs in their house. Ever since I was a child I always loved being with animals. As a little girl, I always preferred to watch animal related cartoon films. I would pick Bambi or Winnie The Pooh over Snow White or Cinderella, for example. 10 minutes drive from our house there was a horse track and stables and I remembered my dad used to take me to see those horses. And it was the weekend highlight for me. At the beginning I wanted to be a vet, obviously with no success. I really can’t imagine my life without animals. At present I have two dogs, two cats and one horse. They help me relax and I love talking and whispering sweet nothings to them.

What I observed with some of your images is how well you captured the tight relationship between the animals and its carers. I know that you’ve developed a friendship with Mosha, a 3-legged elephant. Can you share a little bit about Mosha and your bond with him?

Mosha is clearly the sweetest and friendliest elephant I have ever met in my life. She is really adorable and so photogenic too. I feel I have quite a good instinct, especially with animals. So when I met her the first time I knew immediately that she was the one that I would have a connection with. I didn’t feel a hint of fear when I was sitting or lying together with her. Mosha lost one of her legs at an early age, when she was only 7 months old and she is 11 years now. Despite her suffering and traumatic childhood she maintains her dignity and she indeed has a beautiful personality. She is very affectionate to me and always welcomed me into her pen.

There is another permanent resident called Boon Mee. When I came to the hospital in 2012 I felt that she was a bit suspicious with me so she needed assurance from her mahout that I was harmless. When I returned to the hospital to continue shooting the following year, Boon Mee was much friendlier to me and I knew she remembered me too. I have gained her trust and she became very sweet to me too.

What are your goals for this exhibition and book?

I want people to have more sympathy and empathy towards animals. They are not “just animals”. They do have feelings like us too. Happiness and sadness go hand in hand for them and they have fears and anxiety just like us. I sincerely hope that there will be an improvement of the animal welfare condition in general. Either they are domesticated animals or animals who live in their natural habitats, as far as possible.

Now that you’ve completed this body of work, what are your next plans?

What I have tried to do so far is to concentrate on the relationship and the special bond between animals and their carers. I intend to explore further the background behind the sort of stories I have covered because I believe there is still so much more to discover.